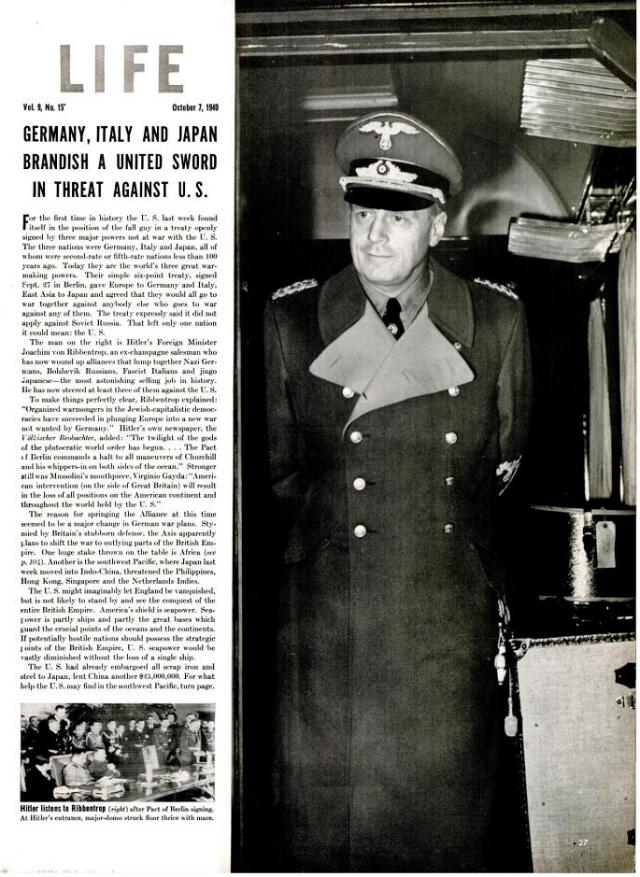 This is from page 27 of the October 7th, 1940 issue of Life Magazine, where it says that "Germany, Italy and Japan brandish a united sword in threat against U.S." But on the other hand, Life Magazine had already ran an article two years earlier entitled "America Gets Ready to Fight Getmany, Italy, and Japan", which appeared on page 11 of Life's October 31st, 1938 edition. So would it not be natural to believe that Germany, Italy and Japan had all acted in self-defense, and the the United States was truly the agressor in World War Two??? But the propaganda in the article itself, meant to anger the American people into supporting another imperialist was fought on behalf of the international Jew, is quite blatant, while also being startlingly admissive:

Germany, Italy and Japan brandish a united sword in threat against U.S.

For the first time in history the U.S. last week found itself in the position of the fall guy in a treaty openly signed by three major powers not at war with the U.S. The three nations were Germany, Italy and Japan, all of whom were second-rate or fifth-rate nations less than 100 years ago. Today they are the world's three great war-making powers. Their simple six-point treaty, signed Sept. 27 in Berlin, gave Europe to Germany and Italy, East Asia to Japan and agreed that they would all go to war against anybody else who goes to war against any of them. The treaty expreessly said it did not apply against Soviet Russia. That left only one nation it could mean: the U.S.

The man on the right [in the photo above] is Hitler's foreign minister Joachim von Ribbentrop, an ex-champagne salesman who has now wound up alliances that lump together Nazi Germans, Bolshevik Russians, Fascist Italians and jingo Japanese - the most astonishing selling job in history. He has now steered at least three of them against the U.S.

To make things perfectly clear, Ribbentrop explained: "Orgamized warmongers in the Jewish-capitalistic democracies have succeeded in plunging Europe into a new war not wanted by Germany." itler's own newspaper, the Völkischer Beobachter, added: "The twilight of the gods of the plutocratic world order has begun.... The Pact of Berlin commands a halt to all maneuvers of Churchill and his whippers-in on both sides of the ocean." Stronger still was Mussolini's mouthpiece Virginia Gayda: "American interverntion (on the side of Great Britain) will result in the loss of all positions on the American continent and throughout the world held by the U.S."

The reason for springing the Alliance at this time seemed to be a major change in German war plans. Stymied by Britain's stubborn defense, the Axis apparently plans to shift the war to outlying parts od the British Empire. One huge stake thrown on the table is Africa (see page 104). Another is the southwest Pacific, where Japan last week moved into Indo-China, threatened the Philippines, Hong Kong, Singapore and the Netherlands Indies.

The U.S. might imaginably let England be vanquished, but is not likely to stand by an see the conquest of the entire British Empire. America's shield is seapower. Seapower is partly ships and partly great bases which guard the crucial points of the oceans and the continents. If potentially hostile nations should possess the strategic points of the British Empire, U.S. seapower would be vastly diminished without the loss of a single ship.

The U.S. had already embargoed all scrap iron and steel to Japan, lent China another $25,000,000. For what help the U.S. may find in the southwest Pacific, turn page.

When we did "turn page", we found more typical Jewish propaganda: a description of Hong Kong's "men of many races".

This article was updated on November 17th, 2015, bu William Finck