Why should we believe without question or documented evidence the "facts" presented about the so-called "Holocaust" when there have been so many obvious lies purported to be "history", especially in the post-war media? Why do people in Germany actually go to prison for merely questioning certain aspects of the "Holocaust"? Why is it that all of the claims concerning this one event of history must be believed and can never be questioned, no matter how ludicrous they actually may be?

And especially when no real physical evidence to support many of those claims has ever been found? Is the "Holocaust" a historic event, or a state-controlled religion? Blaming the German people falsely for the murder of 6 million people, and extorting them for decades based on those claims is a "hate crime"! Many thinking men and women have seen through many of the phony holocaust tales that have been foisted upon us by the media. Here we present just a few.

Although it is not quite to our satisfaction, even Jewish and Polish authorities at Auschwitz have reduced their estimates of the number of people who were "exterminated" there by as much as 70%, for which see FIXING THE NUMBERS AT AUSCHWITZ. [See this screenshot if the article expires.] If the post-war governments were not truthful about the deaths of three million people, dismissing it as "politically motivated",  what other aspects of the Holocaust accounts were actually politically motivated? Who is to gain by suppressing discussion?

There were countless reports of the persecution of "6 Million Jews" in Europe long before a shot was ever fired in the Second World War, and none of them had anything to do with those "evil Nazis"!!! When will Whites ever learn, that World Jewry is a crime ring, and primary among their specialties are pandering, agitation and extortion?

This video is courtesy of TheTrans22 Youtube channel, thank you!

This transcript below is originally from http://pastebin.com/xBDxkLcM 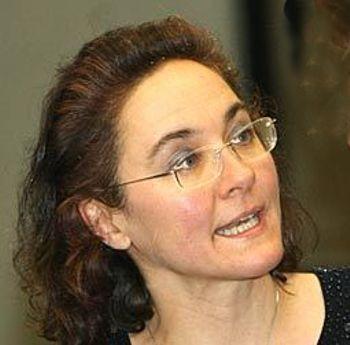 The reality of "Free Speech"

Our last speaker of the day will be lecturing on banned speech, banned evidence and even a ban on legal defence in court. On top of everything else, being banned from defending yourself in court constitutes a particularly  disturbing problem. This speaker is a fully qualified lawyer and throughout her lecture I find it of particular importance, that we don't let our judgement be influenced by what our eyes and ears have already been shown or told.

She really made the headlines a few years ago, as a defense attorney. So let me briefly explain with whom we are dealing with. This defense attorney has the courage of the lion. She is stronger than a man, and I have never met a woman with such a profile. She bravely stood up and took it upon herself to defend Ernst Zündel in the famous case against him, for so-called 'holocaust denial' She was the trial lawyer of Ernst Zündel During the legal proceedings she provided evidence to the court, which could raise doubts regarding the official account of history. This caused furor in the courtroom. And she was prohibited from speaking any further. This speech-ban was ordered as she was presenting the arguments of the defendant. She was not allowed to argue the case, and barred from listing more evidence.

She ignored the speech-ban and continued to submit evidence. And was then threatened on pain of penalties if she persisted. As it became too much for the authorities, she was arrested right there in the courtroom during her defence of the so-called 'holocaust denier' Ernst Zündel. But not even this could silence her, as she continued to speak the case of her defendant while being forcefully removed from the courtroom. For this she was imprisoned for almost three and a half years, in spite of her having no previous convictions.

Ursula Haverbeck points out that with mainstream historical authorities now accepting that Auschwitz was not the scene of the murder of millions of Jews in homicidal gas chambers, there is no established "scene of the crime". She has challenged official bodies including ministers of the various German states (Länder) to provide an answer – to define the scene of the crime. They have so far failed to do so, and she must therefore conclude that there is no substantiation to the official history of Auschwitz.

Ursula Haverbeck is a brave woman to risk prison saying what she has said here on German television. The truth cannot be suppressed forever.

The interviewer just can't handle the notion that there was no holocaust. Discussing the last days of the prison camps, what had happened in Germany in the closing months of the war, it starts to get comical. His entire frame of reference is based on the conveniences of modern life, and he obviously has no capacity to think outside of that.