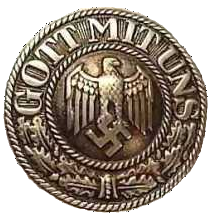 The audio files for this series were replaced with higher-quality copies on March 14th, 2017.

Here, along with some pertinent passages from Mein Kampf and other sources, we shall present the booklet, German Economic Policy by Dr. Wilhelm Bauer, German Institute For Business Research, Berlin 1939 Terramare Office, Berlin W 8

My own comments are in italics. - WRF

This non-technical and summary examination of National Socialist German economic policy will also reveal several other truths which have been lost in the treachery of the Jewish media. Germany, in both world wars, was really only fighting for its rights to self-determination and economic independence. Hitler's real enemy was international finance, and whether it manifested itself in the form of Marxism or Capitalism did not matter, they are two arms of the same beast which sought to oppress and exploit Germany, along with the rest of the world, and the Jews just happen to be its eternal purveyors.

From the May 1932 Emergency Economic Program of the NSDAP:

Hitler knew that Jewish Capitalism and Jewish Marxism were really working hand-in-hand. Today, many Christian Patriots or other White Nationalists also realize that same thing, but most of us needed an additional ninety years of observation to figure it out. National Socialism was the anti-thesis to the artificial dichotomy of Marxism and Capitalism that we are all currently caught up in, and for that reason it had to be destroyed.

Any non-Jew who accepts economic theory from a Jew – from any Jew - has already lost the battle and enslaved himself, because the Jew really only hawks wares from his own artificial Capitalist-Marxist dichotomy, both of which subscribe to the same Jewish-controlled central banking system.

The audio archive for the main Christogenea.org website houses many programs related to the history of the European people and their Christian religion as well as Biblical social and political commentary from a Christian Nationalist perspective.

The Christogenea archive site contains older material produced at Christogenea and elsewhere that has been retired from our main website but which we certainly feel should remain available.

You Can Grab Past TalkShoe Forum Chat Session Transcripts Here