If there are any doubts about the deep longing we have to believe in heroes, to discover those with superior courage, vision and commitment, and then to celebrate their accomplishments, the new exhibition at the Museum of the City of New York should put those doubts to rest. “Facing Fascism: New York and the Spanish Civil War,” which opened yesterday, is in full celebration mode.

And why not? According to the show’s interpretation of that bloody conflict of the mid-1930s, which pitted political virtue against fascistic evil, the group of New Yorkers it focuses on — whose best-known members became famous as the Abraham Lincoln Brigade — were heroes indeed.

They were heroes first, the exhibition suggests, because they were among the 3,000 or so United States citizens (about a third from New York City) who defied the government’s prohibition and secretly went to Spain in 1937 to fight the forces of fascism. Some 800 lost their lives in an International Brigade formed to help defend Spain’s Republican government against Franco’s rebels aided by Germany and Italy.

They were also heroes, the show implies, because they saw what others did not. The Spanish Republic fell in April 1939, and World War II began soon after, partly because these prescient fighters and their political allies had not been heeded. Western democratic leaders instead maintained neutrality during the Spanish Civil War. The Soviet Union did not, becoming the main supplier of men and matériel for the Republic, seemingly trying to head off catastrophe.

These New Yorkers were heroes too, we are meant to think, because they continued the fight against fascism even after their return home. In a series of video interviews, one veteran argues (presumably in the 1980s) that what happened in Spain was no different from what was happening in Nicaragua, El Salvador and South Africa; another asserts that the United States in Vietnam was doing just what Hitler and Mussolini did.

For their moral vision, the exhibition also suggests, these heroic figures paid yet another price. They were persecuted as loyal members of the Communist Party. One object here is a collection can labeled “Save a Spanish Republic Child” that belonged to Julius and Ethel Rosenberg — a piece of evidence introduced against them when they were charged with conspiracy to commit espionage. A vague impression is left that both the accusations and the evidence of party involvement were frivolous compared to the couple’s virtuous intentions.

Actually, this show, which is a collaborative effort between the museum, the Abraham Lincoln Brigade Archives, Instituto Cervantes New York and Tamiment Library at N.Y.U., deviates little from what would have once been called the party line. Its story is told in black strips that are meant to suggest the unfolding of newsreels, the design echoing at times the placards of protest marchers; free-standing biographical pillars of memorabilia stand like memorials to martyrs. Perry Rosenstein, the president of the Puffin Foundation, the main sponsor of the exhibition, writes of these fighters: “They represented the best of our country and the best of our conscience.”

Did they? The real situation is far more complicated than anything suggested here. Some essays in an accompanying catalog published by the museum and N.Y.U. Press hint at other directions the show might have taken, including taking note of the distinctive New York intellectual life that developed on the left, partly in opposition to these ideas. Instead, the curators, Sarah M. Henry and Thomas Mellins, are so focused on the virtues of the fighters that the exhibition seems like an attempt to rehabilitate the Communist left after decades in which historical research and opened Soviet archives have revealed how much darker the Spanish conflict was than the party interpretation ever let on.

In this attempt to re-establish the civil war as a morality tale, the show is not alone. In February, for example, in The Guardian of London, the historian Eric Hobsbawm celebrated the ultimate triumph of the war’s losers and suggested that the virtues of their cause transcended Stalin’s machinations. The recent film “Pan’s Labyrinth” portrays populist forest-dwelling partisans confronting a monstrously evil fascist leader. In June, W. W. Norton is going to release the latest edition of Paul Preston’s much-hailed history, “The Spanish Civil War: Reaction, Revolution, and Revenge,” which blames “an unholy alliance of anarchists, Trotskyites and cold warriors” for obscuring the nature of the war against Spanish fascism. Mr. Preston goes out of his way to justify and explain the Soviet position, dismissing “revisionists” who “resuscitate the basic theses of Francoist propaganda.”

“The most that Stalin wished for the Republic,” Mr. Preston writes, “was that there might be a compromise solution acceptable to the Western democracies.”

The Soviet vision of the war, of course, has the appeal of both simplicity and (partial) accuracy: Franco was indeed a ruthless tyrant whose victory led to wide-scale purges, cruel imprisonments and extensive constraints. The Western democracies were indeed slow to recognize Hitler’s threat. And without Soviet assistance, the Republic would have foundered sooner. What might have happened had the Republic been defended with a real international force?

But look more closely and the formulas don’t fit. Was Franco’s Spain really an arm of what was called “international fascism”? Spain was neutral during World War II, and the Führer wasn’t interested in Franco’s late offer of support. Moreover, Franco’s tyrannical vision never came up to the standards set by Hitler’s mad plans or Stalin’s demonic enterprise, which is one reason Spain could easily slip into democracy after Franco’s death.

The civil war, in fact, had more to do with Spain than with fascism. Hugh Thomas’s encyclopedic “Spanish Civil War” reveals stupefying patterns of legislative failure and manic enterprise in the years before the war. Spain had no strong democratic traditions or middle class. It was an anomaly: a European nation that even World War I had passed by, its agrarian, preindustrial stagnation accompanied by rigid social hierarchies and strong regional allegiances. When a republic was established in 1931, it proved as vulnerable to revolutionary extremism as conservative reaction: land reform could mean land seizure; church reform could mean violence. Anarchism, riots and rebellion were familiar companions of the Republic’s bumbling modernity.

What role then, did the Soviet Union play, once the military rebellion had begun? Invited in by the weak left-wing government, it began a methodical attempt to place its agents at central points of control. In October 1936, André Marty — the Comintern leader skewered by Ernest Hemingway in “For Whom the Bell Tolls” — spoke about first using the Spanish anarchists to win: “After victory we will get even with them.”

The same year, Pravda spoke of victory as well, then of “cleaning up” Spain “with the same energy as in the U.S.S.R.” Stalin opposed those in Spain who called for revolution; he wanted control.

By 1937, after the show trials in Moscow, it was apparent to many devoted idealists that the party’s high moral proclamations were not what they seemed. This is what George Orwell fitfully recognizes in his “Homage to Catalonia.” First he fights in an independent Marxist division that was apparently kept deliberately undersupplied. Later he fears for his life in Barcelona — Republican-held territory — as the party begins a planned purge, including killings and torture. Some recent research has suggested that even members of the Lincoln Brigade — some of whom “disappeared” — were not immune.

“As for the newspaper talk about this being a ‘war for democracy,’ ” Orwell wrote, “it was plain eyewash. No one in his senses supposed that there was any hope of democracy.”

None of this can be learned from the show, and to all of it, our heroes of the Lincoln Brigade were blind — or worse. The Hitler-Stalin pact, which followed Franco’s victory by a few months, also hardly seemed to have affected their allegiances. Last week, in The New York Sun, Ronald Radosh, author of “Spain Betrayed: The Soviet Union in the Spanish Civil War,” quoted a speech by Milton Wolff, one of the exhibition’s Lincoln fighters, made in 1941 while the pact was still in effect. For Wolff, Franklin D. Roosevelt had become the nascent fascist menace; no Lincoln Brigades would be needed against Hitler. “We fight,” he proclaimed, “against the involvement of our country in an imperialist war.”

Orwell said that no one could spend “more than a few weeks in Spain without being in some degree disillusioned.”

Thank goodness we still have heroes. 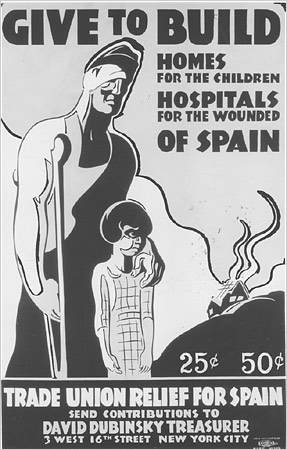 The exhibition "Facing Fascism: New York and the Spanish Civil War" is on view at the Museum of the City of New York from March 21 - August 12. At left, a Trade Union Relief for Spain flier from 1938. 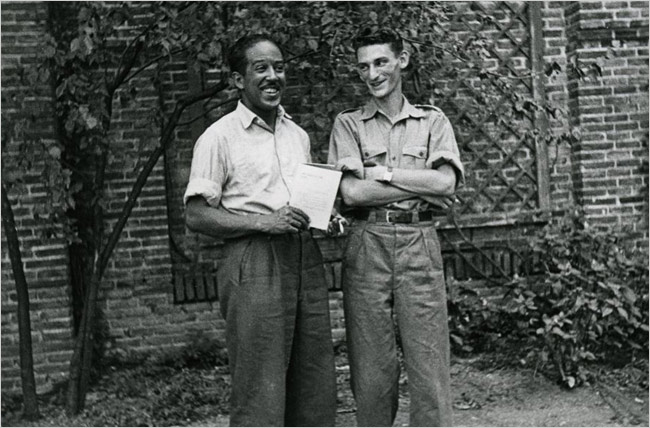 Langston Hughes, left, and volunteer Edwin Rolfe in Spain, circa 1938. 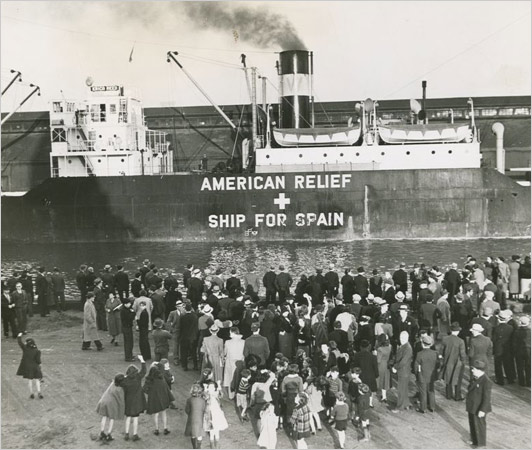 A relief ship for Spain at port in New York. 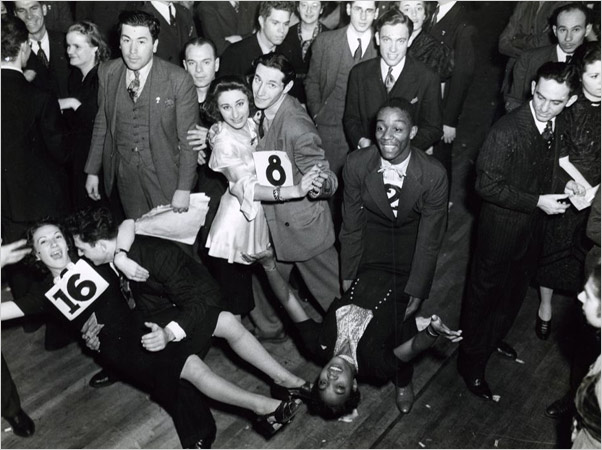 Jitterbug Jamboree at the Liberty Bell Fiesta in New York, dated around 1938. 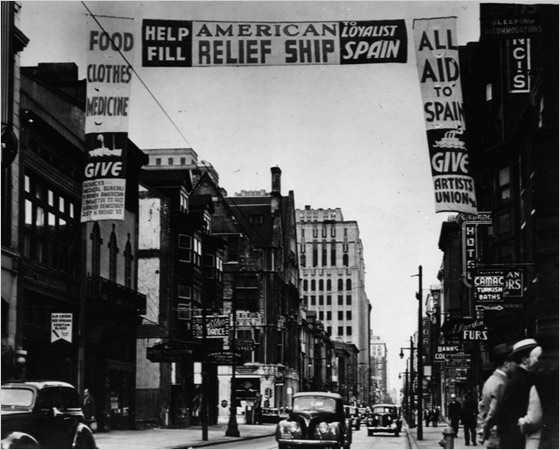 A banner appealing for donations to the Relief Ship for Spain. 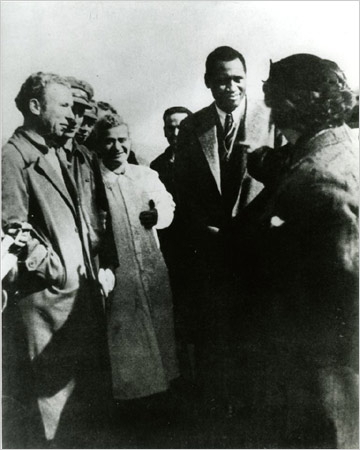 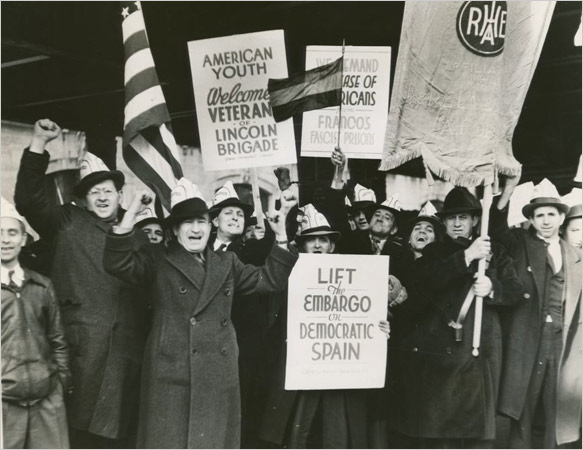 Rally to welcome members of the Lincoln Brigade returning to New York, Circa 1938.