Here we shall present Positive Christianity in the Third Reich by Professor D. Cajus Fabricius

An audio presentation of this booklet is also available here, with commentary by William Finck 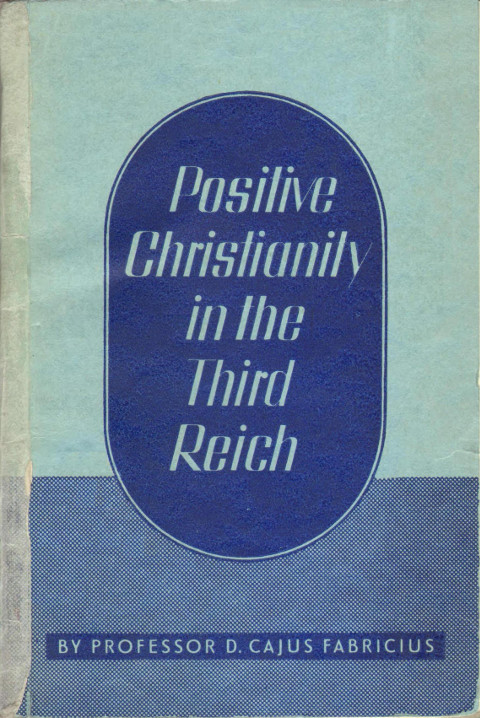 Positive Christianity in the Third Reich

There is much misconception in the world today with respect to the position of Christianity in the Third Reich, opinion being rife that an anti-Christian attitude or paganism is at the moment predominant in Germany. These were the considerations which led me to issue an English edition of my book: “Positives Christentum irn neuen Staat”.

This book is in no way an ofﬁcial statement. The only ofﬁcial book on National Socialism is Adolf Hitler's “Mein Kampf”, Ofﬁcial documents are also “The Programme of the National Socialistic Party” and the Laws of the State. I for my part, have simply endeavoured as a theologian to give in these pages a clear and scientiﬁc exposition of the substance of Christianity in its relations to the substance of National Socialism. The point of view, however, thus set forth in this little book is not only my own, but is shared by millions of German people who are real Christians and at the same time good National Socialists unswervingly loyal to their Führer Adolf Hitler.

The German edition of this book was published in 1935. Since then the German situation, the fundamental principles of the National Socialistic State and the attitude of the Führer towards Christianity have remained unchanged. A few days before writing these lines, the Führer in his speech to the Reichstag on 30th January said, that in all humility he thanked Almighty God for His grace manifested in the uprising of the German Volk. He said too, in speaking of his personal experiences that he had had three unusual friends nearly all his life: In his youth, poverty, then sorrow at the collapse of his People, and ﬁnally anxiety for the Reich. This is the Führer’s unchanged attitude, one conforming both to a Christian and a heroic ﬁgure.

Thus may this little book serve to spread the truth throughout the world. I hope that my attempt at its expression will be understood abroad, and I should be glad to receive any comments on what I have said from friends in other countries.