Email a Link to This Article

By Daily Mail Reporter Last updated at 2:13 PM on 16th September 2009 The only colour photographs of the German surrender of World War Two have emerged 64 years after being taken by a lowly clerk who hid behind a tree. Crafty Ronald Playforth covertly captured one of the most historic events of the 20th century after sneaking into a clump of trees overlooking the scene of the surrender. With his camera, he snapped Field Marshall Bernard Montgomery greeting the highest ranking officers of the remains of Hitler's Third Reich outside his HQ tent. 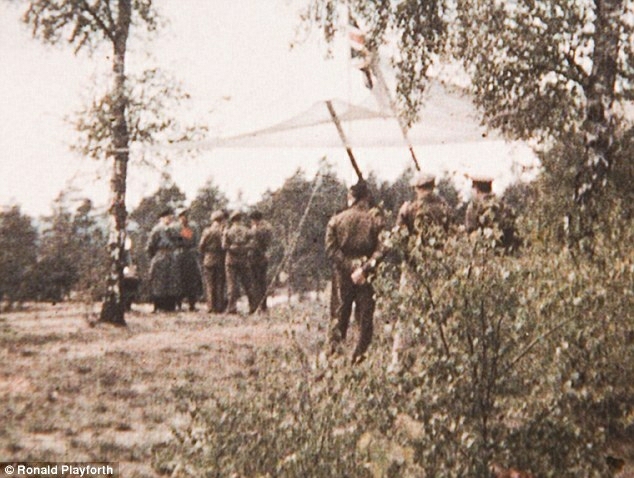 War is over: This distant colour snapshot from behind a hedge records the moment the German high command came to surrender to Montgomery in the spring sunshine on Lunerburg Heath on May 3, 1945 signalling the end of the war Although defeated and just days after the Fuhrer's suicide, the never-seen-before photos show the German officers looking immaculate yet menacing in their long overcoats and jackboots. Until now the only images of the momentous occasion in existence are the official black and white ones held by the Imperial War Museum. Mr Playforth kept hold of his pictures along with a handwritten speech Montgomery wrote in March 1945 to rouse British soldiers ahead of a final push into Germany. The historic items have remained in Mr Playforth's family ever since but have now been made public for the first time as they are being sold at auction. Andrew Aldridge, of Henry Aldridge Auctioneers of Devizes, Wilts, said: 'Playforth knew he was about to witness one of the most important events of the 20th century. 'He was of too low a rank to be present so he crept into the trees and bushes on the perimeter of the HQ tent and took four photographs using colour slides. 'As far as we know these are the only colour photographs to capture this historic event, all the others are black and white. 'Being in colour they add a third dimension to the event and bring it alive.' In 1944 Ronald Playforth was a staff sergeant major and became Montgomery's clerk and was at his side from D-Day until the end of the war. In May 1945 he was stationed at Montgomery's HQ at Luneburg Heath, near Hamburg, when the Nazi high command arrived to sign the papers for the surrender of the German armies in Europe. 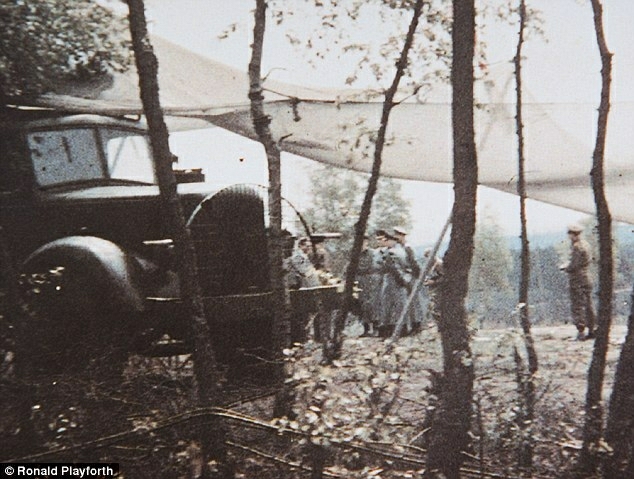 Under cover: Ronald Playforth secretly took four unique colour slide pictures as the Nazi officers, who at well over 6ft tall, all towered over their adversaries as they agreed terms SSM Playforth made himself scarce and darted into the woods just 30 yards from the men. His pictures show Admiral Hans Georg von Friedeburg, the most senior member of the delegation, General Eberhard Kinzel, chief of staff of the north west Germany army, and Major Friedl, a 6ft 6ins Gestapo chief. They depict the Nazis being received by Montgomery, who was wearing his customary black beret and army uniform, before they entered the tent to sign the surrender forms. The day before Montgomery had laid down the terms of unconditional surrender to the same delegation at the same place. 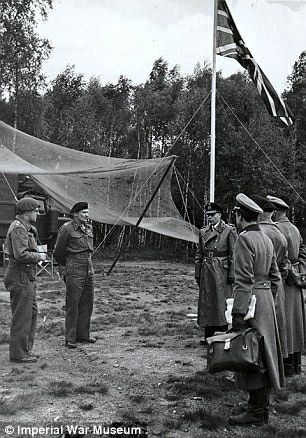 Black and white: The surrender at Luneburg Heath, the historic moment when leaders of the German forces in northwest Europe surrended to Field Marshall Bernard Montgomery When the Germans tried to negotiate, he reportedly gave them a 'tongue lashing' about the bombing of Coventry and the horrors of Belsen. The delegation reported back to their HQ and Admiral Karl Doenitz - Hitler's successor - and were given permission to sign the surrender papers, which they did the next day, May 4. When it was all over Montgomery is said to have leaned back and said simply: 'That concludes the surrender.' Two of the German delegation - Kinzel and Friedeburg - committed suicide weeks later by taking cyanide while Friedl died in a car accident. After the war SSM Playforth left the army and worked in local government before working in a managerial role at ICI. He died 15 years ago aged in his 70s. The four photographs and the handwritten speech were handed down through his family. Part of the rousing speech, published in Soldier Magazine in 1945, read: 'By no possible conceivable chance can Germany win this war. Victory for the Allies, absolute and definite victory, is certain. 'We are fighting on German soil and we have entered the ring for tha last round, there is no time limit for this round, we shall continue until our opponent has had enough.' It was handed by Montgomery to SSM Playforth who kept hold of it after typing it out. Mr Aldridge said: 'We are expecting a lot of interest in these items, from private collectors to military museums.' The estimate for both lots is between £1,000 to £1,500 each and the auction takes place on Saturday. Read more: http://www.dailymail.co.uk/news/article-1213856/Uncovered-The-worlds-colour-pictures-Germans-World-War-Two-surrender--taken-clerk-hiding-tree.html#ixzz0RHo3g6Og