The paper presented here is found at the German Propaganda Archive at Calvin.edu: Those Damned Nazis

The translation of Das Jahr 2000 used in this presentation of Dr. Goebbels' article is found at the German Propaganda Archive at Calvin.edu: http://www.calvin.edu/academic/cas/gpa/goeb49.htm

The 25 points of the National Socialist Party Program were written by Adolf Hitler and Anton Drexler. The following is from the opening of Mein Kampf, Volume 2, Chapter 1:

On Ferbruary 24th, 1920, the first great mass meeting under the auspices of the new movement took place. In the Banquet Hall of the Hofbräuhaus in Munich the twenty-five theses which constituted the programme of our new party were expounded to an audience of nearly two thousand people and each thesis was enthusiastically received.

The reasons for the necessity of the 25 points of the National Socialist Party Program were outlined in Mein Kampf, Volume 2, Chapter 5. The following is from part of what Hitler had said in that chapter (Page 256 here):

If the idea of the People's State, which is at present an obscure wish, is one day to attain a clear and definite success, from its vague and vast mass of thought it will have to put forward certain definite principles which of their very nature and content are calculated to attract a broad mass of adherents; in other words, such a group of people as can guarantee that these principles will be fought for. That group of people are the German workers.

That is why the programme of the new movement was condensed into a few fundamental postulates, twenty-five in all. They are meant first of all to give the ordinary man a rough sketch of what the movement is aiming at. They are, so to say, a profession of faith which on the one hand is meant to win adherents to the movement and, on the other, they are meant to unite such adherents together in a covenant to which all have subscribed. 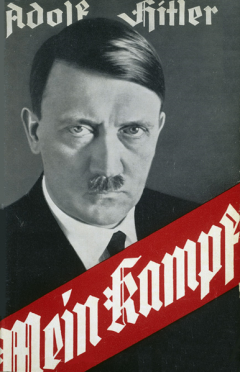 From the host's program announcement:

On this edition of Truth Militia Radio with John Friend, we’ll be joined by William Finck of Christogenea.org and The Mein Kampf Project.  William and I will be discussing the origins of the criminal network known today as international Jewry, Adolf Hitler, Mein Kampf, WWII and related matters.  We'll focus primarily on Chapter XI of Mein Kampf, Nation and Race, and also discuss ethnic nationalism versus civic nationalism, fascism, National Socialism, communism, and international capitalism.