The Communist Manifesto by Karl Marx and Friedrich Engels

A spectre is haunting Europe -- the spectre of Communism. All the Powers of old Europe have entered into a holy alliance to exorcise this spectre: Pope and Czar, Metternich and Guizot, French Radicals and German police-spies.

Two things result from this fact.

I. Communism is already acknowledged by all European Powers to be itself a Power.

II. It is high time that Communists should openly, in the face of the whole world, publish their views, their aims, their tendencies, and meet this nursery tale of the Spectre of Communism with a Manifesto of the party itself.

To this end, Communists of various nationalities have assembled in London, and sketched the following Manifesto, to be published in the English, French, German, Italian, Flemish and Danish languages.

For an in-depth and historical assessment of the validity of the Protocols, see the ongoing series at Christogenea entitled The Protocols of Satan. 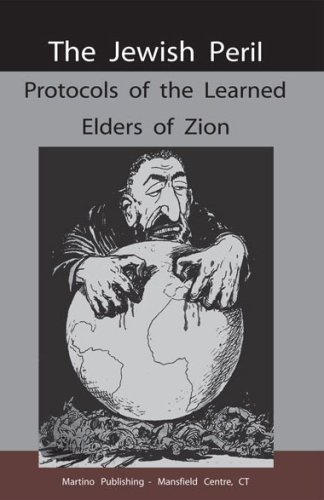 The Protocols of the Learned Elders of Zion. History and the role of the internationalist Jew in history proves that these are copies of legitimate documents detailing plans for world conquest by the Jews, as Henry Ford noted so many decades ago. The Protocols describe the Zionist plan for Jewish world governance.

The largest media conglomerate today is Walt Disney Company, whose chairman and CEO, Michael Eisner, is a Jew. The Disney Empire, headed by a man described by one media analyst as a "control freak", includes several television production companies (Walt Disney Television, Touchstone Television, Buena Vista Television), its own cable network with 14 million subscribers, and two video production companies. As for feature films, the Walt Disney Picture Group, headed by Joe Roth (also a Jew), includes Touchstone Pictures, Hollywood Pictures, and Caravan Pictures. Disney also owns Miramax Films, run by the Weinstein brothers. When the Disney Company was run by the Gentile Disney family prior to its takeover by Eisner in 1984, it epitomized wholesome, family entertainment. While it still holds the rights to Snow White, under Eisner, the company has expanded into the production of graphic sex and violence. In addition, it has 225 affiliated stations in the United States and is part owner of several European TV companies. ABC's cable subsidiary, ESPN, is headed by president and CEO Steven Bornstein, a Jew. This corporation also has a controlling share of Lifetime Television and the Arts & Entertainment Network cable companies. ABC Radio Network owns eleven AM and ten FM stations, again in major cities such as New York, Washington, Los Angeles, and has over 3,400 affiliates....

Christogenea.org plans shortly to have this book available in text. This is a facsimile copy of a very rare book, The Jew at Home, by Joseph Pennell, published by Appleton & Company, NY, 1892. It was from a book photocopied at a San Diego library many years ago, but it is quitre readable, and quite interesting!