The following is an excerpt from the book of the same title, available from National Vanguard Books, PO Box 330, Hillsboro WV 24946 USA.

A common belief among defenders of the Second Amendment to the U.S. Constitution is that the National Socialist government of Germany under Adolf Hitler did not permit the private ownership of firearms. Totalitarian governments, they have been taught in their high school civics classes, do not trust their citizens and do not dare permit them to keep firearms. Thus, one often hears the statement, "You know, the first thing the Nazis did when they came to power was outlaw firearms," or, "The first thing Hitler did in Germany was round up all the guns."

One can understand why many American gun owners want to believe this. They see in the current effort of their own government to take away their right to keep and bear arms a limitation of an essential element of their freedom and a move toward tyranny, and they want to characterize the gun-grabbers in the most negative way they can. Adolf Hitler has been vilified continuously for the past 60 years or so by the mass media in America, and certainly no politician or officeholder wants to be compared with him. If the gun-confiscation effort can be portrayed convincingly as something of which Hitler would have approved, it will have been effectively tarred.... 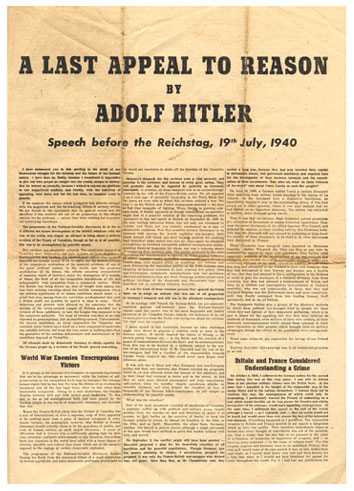 The programme of the National Socialist Movement, in so far as it affected the future development of the Reich’s relations with the rest of the world, was simply an attempt to bring about a definite revision of the Treaty of Versailles, though as far as at all possible, this was to be accomplished by peaceful means....

A CONCURRENT RESOLUTION AUTHORIZING AN INVESTIGATION OF THE ATTACK ON PEARL HARBOR ON DECEMBER 7, 1941, AND EVENTS AND CIRCUMSTANCES RELATING THERETO

PROCEEDINGS OF NAVY COURT OF INQUIRY

The audio file for this podcast was replaced with higher-quality copy on March 15th, 2017.